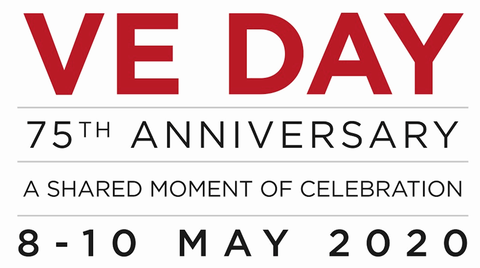 Starts: when you are ready
Note: latecomers will be admitted at your personal discretion

Music and a poem - two items especially written for VE 75:
Time for a little nostalgia:
Wingy Manone was a jazz trumpeter, composer, singer and bandleader. He lost his arm in a streetcar accident, aged 10, hence 'Wingy'.

Andy Rezaf was a poet, composer and lyricist who also wrote Ain't Misbehavin' , Honeysuckle Rose, Stompin' at the Savoy, and 12th Street Rag.

Why Dans l'Ambiance? In 1976-77 I was one of two 1st tubas in the Harmonie Municipale de Châteauroux (Town Silver Band). Week by week well-known (except to me!) music cards were thrust into my lyre. This was the first piece I already knew.

Châteauroux took quite a blow when France pulled out of NATO. It had been a major US Air Force base. Hundreds of jobs were lost.

Their compensation included a new City Hall with a café at street level, a massive prison, and a Pyrex factory which still uses the original borosilicate glass (the US firm uses a lesser quality glass).  In 2001 Châteauroux became the first town in France to provide free public bus services for all.
Producer: Peter Steadman  ♦  Contributors: Richard Miller, Jane Forrester
We hope you have enjoyed your  Music for VE Day 75 Concert Online


Watch your email and this website for our next Online concert