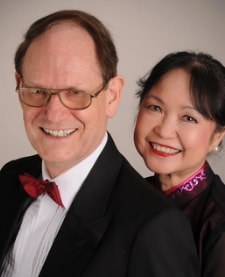 Starts: when you are ready
Note: latecomers will be admitted at your personal discretion

Contrary to expectations, Robert and Linda met not through music but on a dating website. They discovered much in common, and married in 2008. Piano à Deux was formed in 2010 .

Their research has both informed their playing of the standard repertoire and led to their unexpected discovery of neglected composers like George Onslow. Their latest CD: France Revisited, recorded for the Divine Art label, includes his Op 7 Duo Sonata, his six solo pieces, Debussy’s ‘Petite Suite’ and songs by Poulenc (arranged by Linda).

Their first CD Strictly not Bach was released in 2011 to glowing reviews. Through this Piano à Deux and their audiences have raised £2,000 for charities like WorldVision. In 2015, they were on BBC Radio 3’s ‘In Tune’ with the award-winning violinist Erzhan Kulibaev.

Their charisma, comedy and virtuosity, set in scintillating original arrangements, has won them a large following on land and sea.

Linda has been featured in the Singapore Straits Times and the Singapore Airlines In-flight Magazine and as cover girl for Woman Alive magazine.

In 2002, Janet Fairlie and Linda created Diva, Diva delighting cruise line passengers on Crystal, Cunard, Holland America & Regent Sevenseas. Then, in 2005, each Diva stepped out, Janet into London’s West End, and Linda to touring with her solo shows which have met with critical acclaim on land as well as on luxury cruise lines like Silversea & Seabourn.
Concert Performances by Piano à Deux
We are safely back in piano-land, specifically, four-hands-land, for our final performance in this week's concert.


Watch your email and this website for our next Online concert