Martin Fliegenschmidt (b1981), David Jürgens, Wincent Weiss (b1993), Sascha Wernicke
from the debut album Irgendwas gegen die Stille    Something for the Silence
Feuerwerk

We are in for quite a varied journey this week as the subject of Musical Fireworks turned out to be less fruitful than expected. Even looking up specific fireworks failed. Catherine Wheel is a singer, and Roman Candle are a pop group!

There is one entirely obvious choice and that I have saved for the finale. Before that we will explore a few other musical genres.

The song had its debut in Zurich's Schauspielhaus, in the musical Der schwartze Hecht - The Black Pike - in 1939.  Burkhard reworked it for the musical Das Feuerwerk. Since then there have been at least 67 cover versions around the world.
We leap forward 34 years for this next item.

Songwriters pick out different characteristics of fireworks. There are the obvious physical features - colour, shape, display, and sound - while others consider their existence 'in the moment' their transience.

Katy Perry is thinking of the 4th of July fireworks, and letting the light shine.
Next is a rather evocative song that may take you back to childhood visits to public firework displays, in a park, on the cliffs, across a lake or a river. You will have to forgive the rather loud guitar break towards the end.

If that's really not going to do it for you, try the orchestral version instead. It was made after the terrorist attack on the crowds at the Fête Nationale fireworks in Nice, 14th July 2016.

Calogero is a very successful singer-songwriter. His name comes from the greek for a monk:  καλόγερος kalogeros.
Richard Miller spotted this next item for us. It is the most recent of all the works here, but no less beautiful for that.

Here again, it is the transitory nature of a firework that Wincent Weiss calls on (pronouce the Ws as Vs). The song comes from his 2017 debut album Irgendwas gegen die Stille - Something for the Silence. Although he has had both single and album chart successes since, in 2013 Wincent Weiss just missed out on the auditions for the German version of Pop Idol - Deutschland sucht ein Superstar (Germany seeks a Superstar).

The music was composed for a fireworks display to be held in Green Park on 27 April 1749. The theme was the end of the War of Austrian Succession and the signing of the Treaty of Aix-la-Chapelle the previous year.

Handel was displeased when told he could not include those non-military stringed fellows - violins. King George II wanted to hear only wind and percussion. Displeased too when he was told that the rehearsal would not be in situ, but rather it would take place at the Vauxhall Gardens.

Bear in mind that there was only one Thames crossing for vehicles in those days - London Bridge. So in scenes we might liken to Millennium Eve on the DLR at Stratford, the bridge had a 3-hour carriages-jam! It is varioiusly claimed that 8,000 - 12,000 people paid half-a-crown a piece (2 shillings and sixpence, 2/6d, or 12.5p) to attend this rehearsal.

In Green Park, the musicians were in an Italian-designed pavilion, and there were further Italian influences in the decorations. Even the fireworks were controlled by Italians. The music was a great success, the fireworks less so due to the rainy weather and several mis-fires.

[wikipedia] ... in the middle of the show the right pavilion caught fire. A woman's clothes were set alight by a stray rocket and other fireworks burned two soldiers and blinded a third. Another soldier had his hand blown off during an earlier rehearsal for the 101 cannon  used during the event.

Didn't they always tell us how dangerous fireworks are, though!

So, take your mind off to Green Park, with the wood and textile, theatre-built set, ready for the Royal Fireworks: 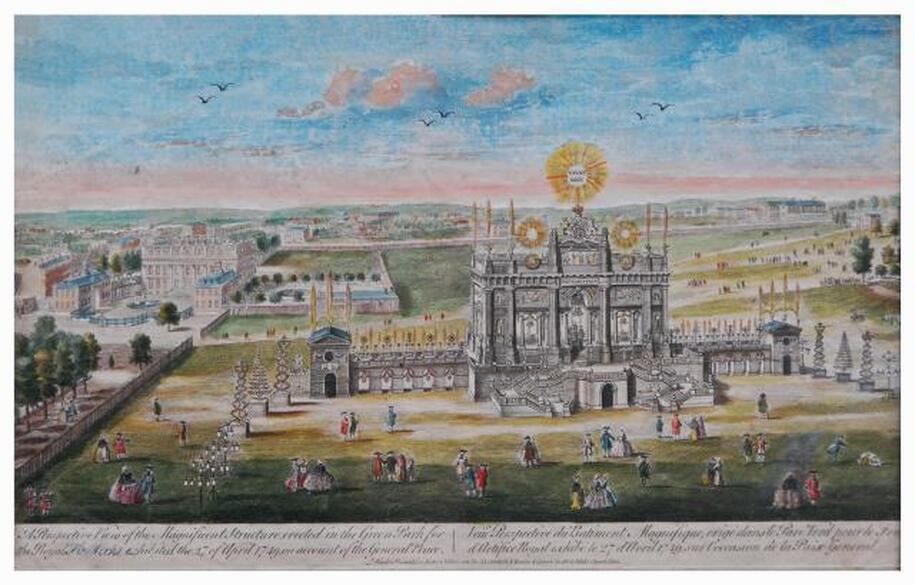 For the lovers of wind instruments I offer this enthusiastic performance on the left. Only a few minor adjustments occur through the introduction of clarinets and saxophones doubling on some oboe parts. And as they are indoors they make do with a single pair of timps.

On the right (or lower down) is the orchestral version, from a BBC Promenade Concert.

We still need your help to fund the FIVE recent concerts

click on the buttons below to Listen (and watch) Again

and please tell your friends about them too !


REBELLION! | Joglaresa
Join subversive artists Joglaresa for a trip through songs of protest from medieval times, and a timely reminder that authority figures have always been the subject of satire, protest and ridicule.
"This is exactly what I needed today."  - https://www.bremf.org.uk/event/rebellion/

SWEET AYRES OF ARCADIA | Musicke in the Ayre
Escape into a perfect Arcadia of Tudor lute songs by Byrd, Dowland, Campion and others. Filmed in the stunning house and gardens of St Mary's House, Bramber.
"This is lovely."  - https://www.bremf.org.uk/event/sweet-ayres-of-arcadia/


THE FOUR FACES OF GAIA | Music from around the globe
Our final event of 2020 brought together musicians from Africa, India, The Middle East and Europe in celebration of the vibrant cultural connections which stretch through time and space to connect us all. An uplifting and memorable way to round off the festival.
"Beautiful! Congratulations!"  -  https://www.bremf.org.uk/2020/index.htm
PROGRAMME