Anything you can do
performed by Betty Hutton and Howard Keel


The Girl that I Marry
performed by Frank Sinatra

There's No Business like Showbusiness
performed by Ethel Merman

The Surrey with the Fringe on Top
performed by Hugh Jackman, Maureen Lipman, and Josefina Gabrielle

Duet: You're just in Love
performed by Ethel Merman and Donald O'Connor

We said we wouldn't look back
performed by the original 1954 London stage cast,  John Warner and Eleanor Drew

The Lonely Goatherd
performed by Julie Andrews and the children

So Long, Farewell
performed by Julie Andrews and the children

Are you in the mood for an argument? Well I am, so this is how we are going to open this week's concert selection, with a famous argument song sung by the sharpshooter Annie Oakley (from Buffalo Bill's Wild West) and love interest and fellow sharpshooter Frank Butler, from, of course, the 1946 Broadway hit musical Annie Get Your Gun.
Annie Get Your Gun is literally packed with Irving Berlin's wonderful show tunes.
Which shall we hear next? How about the gentler, The Girl that I Marry.

How does your situation match up ?

Let Frank Sinatra run through the list of requirements:
You don't want me to make this an Annie Get Your Gun concert, do you? Those who do want more of Annie and Frank I suggest you look up the musical on wikipedia, and then search for each number on youtube

I'll just offer you one more hit here. You Can't Get a Man with a Gun? Doin' what comes Natur'lly? My Defenses are Down? No, I'm going to pick the one that catches people out in quizzes because they forget it comes from Annie Get Your Gun.

It sums up everything we'll hear on this page: There's No Business Like Showbusiness.

And here comes Ethel Merman who played Annie in the original 1946 Broadway production. It looks like this is from the first Broadway revival in 1966, which was broadcast on NBC in 1967 - although wikipedia claims the tapes for that production were lost and only the audio still exists. Let's not worry and just enjoy the wonderful sound of a great musical actress, Ethel Merman:
In 1927 Jerome Kern wrote the music and Oscar Hammerstein II the words for a musical about performers, stagehands and dockworkers on the Cotton Blossom, a Mississippi River show boat. Based on a book with the same title, the musical was Show Boat.

The musical told a story, in sequence, that ran from 1887 through the forty years to 1927.  It didn't shy away from themes including racial prejudice and tragic, enduring love. Let us listen to two of the classics that come from Show Boat.

Hattie McDaniel was an actor, singer-songwriter and comedian. She goes down in history as the very first African-American woman to win an Oscar, for Best Supporting Actress as Mammy in the 1936 film, Gone with the Wind.

And then we turn to Paul Robeson in solo as he sings Ol' Man River. Although Kern and Hammerstein wrote the part specifically for him, giving extra scope for his magnificent voice, Paul Robeson was not available for the original 1927 Broadway production. He did perform in the West End premiere and here he is in the 1936 film.
In 1943 Oklahoma! earns its place in history as the first collaboration between Oscar Hammerstein II and Richard Rodgers.

They based the musical on the 1931 Lynn Riggs play Green Grow the Lilacs.  Like Show Boat, this is a 'book musical' with a strong storyline, and songs that move the story forward and deal with emotions beyond comedy.

The show is packed with hits, including:

My pick is another tune, The Farmer and the Cowman, which is unusual in this musical because it does not really advance the plot. I will let wikipedia explain:

In contrast to the rest of the musical, "The Farmer and the Cowman" does not further the plot but does allow the audience to witness the tension between the farmers and the cowmen, a tension that comes from the farmers' desire to protect their crops with fences while the cowmen prefer the freedom to move cattle over a wide open range.[1] Carnes, Aunt Eller and Ike act as peacemakers and attempt to reconcile the two sides. The song appears to have no effect, and the two sides start fighting. Aunt Eller then shoots a gun in the air to stop the fighting, and conducts both groups – preaching peace with the lyrics of the song, but threatening violence.

At the end of the song, however, there is a resolution. Both sides agree to act hospitably toward each other after receiving a bit of advice from Aunt Eller:

"I don't say I'm no better than anybody else,
But I'll be danged if I ain't just as good!"

The song resolves a minor subplot, although the conflict between Jud and Curly (a farmer and a cowman) has yet to be resolved at that point.

Substituting Democrats and Republicans for the original agricultural trades, would it bring Americans together if they were to sing this song today?

Oklahoma! was the only musical Fred Zinnemann ever directed. It was the first feature film made using the modern Todd-AO 70mm widescreen process, but was also made in 35mm CinemaScope as few theatres were equipped for widescreen at the time.
The 1955 film cost US$6.7million to make (Show Boat had cost $1.2million.)

Let's pick one more song from Oklahoma!. Don't worry, you will be going out in the Surrey, but the production is more modern as it had Hugh Jackman, Maureen Lipman and Josefina Gabrielle. This comes from the 1998 National Theatre production which won an Olivier Award for Outstanding Musical Production.
We have reached the 1950s, a very fruitful time for musical theatre, before TV had truly taken off and most people had only one, and then two channels, and they were both monochrome.

The colour of a stage production must have had an appeal then that it lost for a while after colour came to TV. But eventually, even with colour TV, people began to crave live performance and that brought a further revival.

We are not there yet, we are still in the 1950s.
And here is this week's farewell, which leaves us plenty of later material for another
Music of the Musicals in 2021.

If we can slip in a special here and there we will, otherwise it's farewell until
a piano selection for AGM week at the end of February and
the return of concert selections in April 2021

We still need your help to fund the FIVE recent concerts

click on the buttons below to Listen (and watch) Again

and please tell your friends about them too !

LCAS are members of this regional group of concert managers who meet annually to discuss matters of mutual interest.

Wimbledon International Music Festival are going digital this year with their 10 Festival Concerts.

WIMF are offering discounts on Festival Passes - or you can still book for individual performances.
Click on the image above for full details. 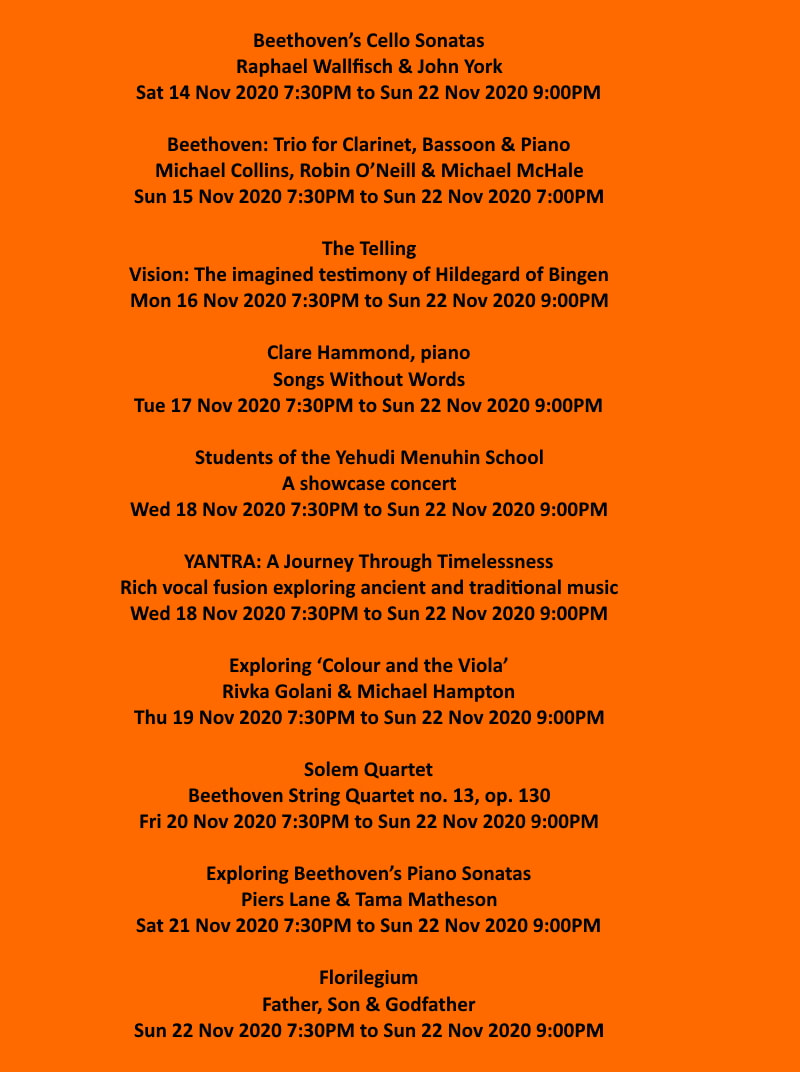 
REBELLION! | Joglaresa
Join subversive artists Joglaresa for a trip through songs of protest from medieval times, and a timely reminder that authority figures have always been the subject of satire, protest and ridicule.
"This is exactly what I needed today."  - https://www.bremf.org.uk/event/rebellion/

SWEET AYRES OF ARCADIA | Musicke in the Ayre
Escape into a perfect Arcadia of Tudor lute songs by Byrd, Dowland, Campion and others. Filmed in the stunning house and gardens of St Mary's House, Bramber.
"This is lovely."  - https://www.bremf.org.uk/event/sweet-ayres-of-arcadia/


THE FOUR FACES OF GAIA | Music from around the globe
Our final event of 2020 brought together musicians from Africa, India, The Middle East and Europe in celebration of the vibrant cultural connections which stretch through time and space to connect us all. An uplifting and memorable way to round off the festival.
"Beautiful! Congratulations!"  -  https://www.bremf.org.uk/2020/index.htm
PROGRAMME

You may be wondering: Why is this page so blasted long?

Recently we received a complaint from a professional musician and tutor saying we were not helping struggling musicians by showing youtube selections. Having explained some of our less derivative work to him, we realised that we tell you about lots of things in our newsletters that never make it to the webpages.

In future we will show here: our regular support for the Wigmore Hall and the Philharmonia, for some of our regular musicians who have been recording or releasing work during the lockdowns, this week's offer from the Wimbledon International Music Festival, and our regular work with the Brighton Early Music Festival. Our promotion of local live events such as MAIASTRA and of the Dorking Concertgoers will also reach the page.