Georges Bizet
from the opera Carmen Act 2
Toreador Song    Votre toast, je peux vous le rendre     Your toast, I can return it to you- flute, 2 guitars 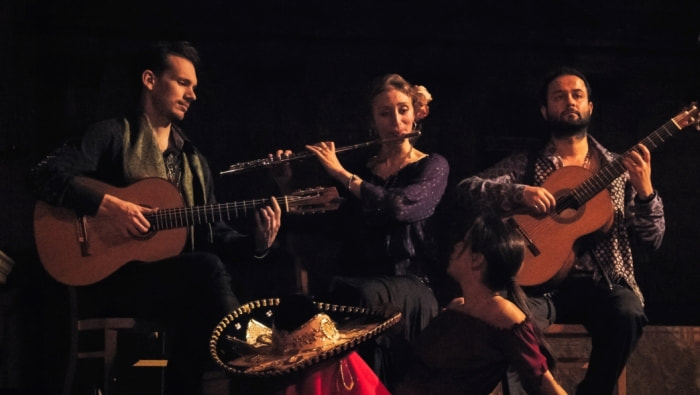 CarmenCo
is an ensemble comprising

Exploiting the rich texture of two guitars as a duo or with flute or voice, as well as applying our skills in arranging, we perform vibrant, visual, varied yet cost-effective programmes which can easily tour low-engaged communities. We perform all our music from memory and we move around and dance while playing.

In 2019 we won a generous Arts Council England grant to develop and tour a new concert-play Creating Carmen, using our music and arrangements, while adding two actors, lighting, director and script writer.

CarmenCo trio grew when international solo guitarist Francisco Correa www.franciscocorreaguitar.com joined the Andrews Massey Duo, (formed by Emily & David in 2009). This duo has a fine pedigree: won the Tunnell Trust Award 2012-2013; were Royal Overseas League Competition semi-finalists 3 times & have appeared at Wigmore Hall, St Martin in the Fields, Kings Place and in Germany, Italy & Sweden. They have made 3 CDs. One of their videos had 240,000+ YouTube views. For more information see www.andrewsmasseyduo.com

Comments from Peter: All the members of the CarmenCo Trio have been performing in these lunchtime concerts, in duos and as soloists, in each of Music on Thursdays' eight previous years. With our 10th year coming in 2021, we didn't want to break the sequence, yet COVID cut in and that continuity was very nearly lost.

Not far into lockdown I was reminded of the trio's technical prowess by the recordings Emily & Francisco began to produce. So I put to them the idea of a 'virtual' concert. Once I had convinced the Arts Alive Festival Committee that this was the way forward, not only for MoT, but for all our local arts communities, Emily, Francisco and David were the very willing test-bed for technical solutions.

That encouraged me to approach the other musicians you are hearing in these five Festival lunchtime concerts. I am delighted to say that, despite their own particular problems, locked buildings, people being locked down in a different country or a different part of the country, none of them turned the idea down. Every one of them was our first choice for that date.

Thank you Emily, Francisco & David because without the strength of your enthusiasm none of these 'recorded as live' concerts would have taken place.

As for CarmenCo, the production. The trio kindly invited me to an early try-out at Guildford's Electric Theatre, nearly three years ago. I could see it was an interesting way of combining a story line with their music. I must admit I wrote them some very direct notes afterwards and, after a highly appropriate gulp, (I did say I was 'direct') they took my remarks in the spirit intended. Their own journey is described on the CarmenCo website.

One day we would like to bring you the full CarmenCo production with the two actors and the developed script. That will have to wait until COVID is much better tamed. If you have enjoyed today's recording, you will absolutely love seeing the whole production performed in a theatre setting.

We hope you have enjoyed your time with  CarmenCo


Watch your email and this website for next week's

or to see what we have lined up for you

CarmenCo is out NOW! Featuring 17 tracks of gorgeous Spanish and Spanish-inspired
music for guitars, flute and voice.

£15 including postage and packing.

To purchase CarmenCo as well as other AM Records releases, visit our shop

Note: LCAS does NOT benefit from the sales of our artistes' CDs - but we do encourage you to support them by purchasing