From the Sagbutt to the Trombone


Starts: when you are ready
Note: latecomers will be admitted at your personal discretion

From the Sagbutt to the Trombone

performed in rehearsal by Choir of King's College Cambridge, with
His Majestys Sagbutts and Cornetts, principally Adam Woolf's sagbutt

Let's leap forward many hundreds of years to the point where the sagbutt, or sackbutt is used, in the 16th and 17th centuries. The instrument was already known to Italians as the trombone (large trumpet). Adam Woolf explains and demonstrates in this short video from the chapel of King's College Cambridge where he was rehearsing with the local choir, The Choir of Kings College Chapel:
I have used the term 'modern trombone'. In fact the instrument is little changed since those early sagbutt days. The tubing is slightly broader, the bell is longer and wider, the mouthpiece is wider and deeper.

Unlike the French horn, cornet or euphonium, the tubing is mostly cylindrical. The others are slightly conical, growing wider all along their length, not just at the bell section.

If you see a valve on a trombone it is usually there to change the key of the instrument, whereas on the trumpet, horn or tuba valves provide the full range of notes by lengthening the tube. The trombonist and the sackbutt player do that by extending the slide.

Here, then, is a versatile instrument, found in orchestras, in brass and military bands, and equally at home in jazz and swing.

Perhaps we should have a proper introduction, from a professional player. Here is Byron Fulcher, principal trombonist of the Philharmonia Orchestra:
These notes from classicfm.com set Egmont in its historical context, and give a description of the overture:

When the Spanish occupied the Netherlands in the 16th century, Count Egmont, member of one of the oldest and noblest families in Flanders, led resistance to the Inquisition and persecution of Protestants. For his troubles, he was arrested and executed.

Now you know this, listen again to the Egmont Overture. In the music you hear the arrest of the Count. You hear, in the deep strings, the Spanish judges prosecuting him. You hear, in the plaintive wind, his wife, mother of his 11 children, pleading for mercy for her husband.

You hear, in the fortissimo staccato notes of the brass, the verdict of guilty being given. A final piano (soft) pleading in the first violins (high trombone notes). The whole orchestra in unison on a single note is the sentence of death. A forte (loud) fall of a fourth in first and second violins is the executioner’s sword coming down.

But Beethoven has not finished. Triple piano (very very soft), slowly building to a massive fortissimo (very loud), an exhilarating passage in the major key (signifying victory) which tells us that Count Egmont’s spirit, and all he fought for, lives on; that the people of the Netherlands ultimately threw out the rapacious invader. That – as in so much of Beethoven’s work – darkness has given way to light, freedom has triumphed over oppression.

In this case he felt it particularly personally. Beethoven was writing about the land his beloved grandfather and forebears came from.

Remarks in (brackets) added by Peter Seadman who wishes he'd understood all that when he studied the piece for O-level.
ENCORE
Presenter: Peter Steadman
Assisted by: Jane Forrester & Richard Miller

We hope you have enjoyed your


Watch your email and this website for next week's Online concert

What do you give the lady who, after 100 years, says she needs nothing for herself?

Mollie Canning decided it would be a wonderful way to celebrate her 100th birthday if she could encourage people to give to the charity she has supported for several decades.

So we are appealing to the listeners to these concerts to please join in, and drive the total raised for MENCAP well above Mollie's original target, and on towards £5,000.

Every gift counts, small, medium, or extremely large. And if you are able to add Gift Aid that's even better. Please click below to get started:

Please write LCAS in the message box, and bear in mind costs to MENCAP will be around 5% -10% of your total donation. 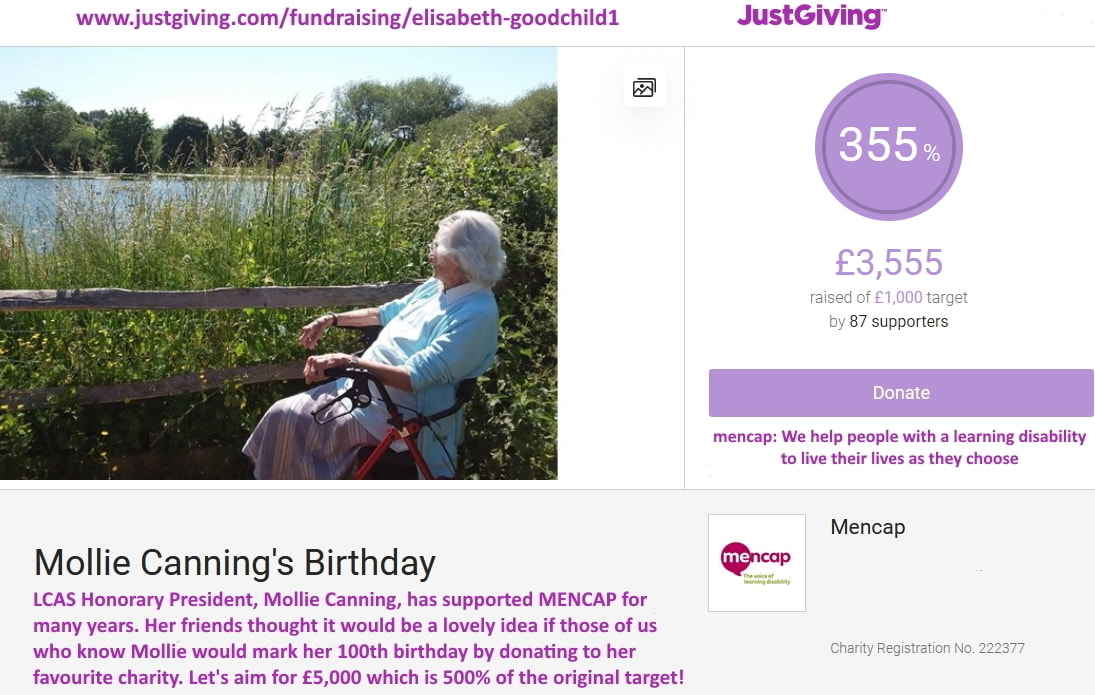