Starts: when you are ready
latecomers will be admitted at your personal discretion

performed by Rhys Whatty at the 2014 Urdd Eisteddfod

performed by Anne Denholm before the opening event for the 2017 Thaxted Festival, Essex

performed by The Hermes Experiment

The plan for today's live concert was to invite harpist sisters Heather and Fern Brooks. Within days of making those arrangements everything changed and they kindly agreed to hold on as late as possible before deciding whether they could play live at LMC. Sadly, a few days before July 1st we had to admit defeat.

The sisters then sent links to some of their playing, in online videos, so let's hear some of those performances to open today's concert.

performed by harpists Fern Brooks & Heather Brooks
Fern Brooks is currently studying at the Purcell School, working towards Grade 8 on both harp and piano. She started playing the harp at the age of 8.

Older sister Heather Brooks was Head Girl while at the Purcell School, and now studies at London's Guildhall School of Music & Drama. She has been a Section Leader in the National Youth Harp Orchestra of Great Britain, and conductor's assistant for the NYH Training Orchestra. Heather has won many awards and competitions in the years since taking up the harp at the age of 10.

Each sister has been awarded a Government Music & Dance Scheme Scholarship and is a Beneficiary of The Robert Bouffler Music Trust. In July 2015 Heather was awarded the long term loan of  The Charles Steer Promenaders Salvi Aurora Harp by The Cherubim Music Trust, from which Fern also benefits.

Next we shall hear three works performed by Heather. André Caplet was a French harpist and composer whose Divertissement à la Française is followed by an Allegro movement by CPE Bach, 2nd surviving son of JS Bach.

The third piece is by Grandjany, born in Paris, he attended the Conservatoire there. In 1936 he moved to the US and was appointed head of the Harp Department of the Juilliard School in1938. The American Harp Society was founded in his New York apartment, when its committee met there for the first time in 1962. He remained an enthusiastic supporter and promoter of the Society for the rest of his life.
Hands up if you have your own harpist.

OK, so it's just HRH The Prince of Wales then.

You wonder how the rest of us manage. Fortunately, HRH does not take up all of Anne Denholm's time and she is available for other projects. Like this Scarlatti performance before the opening event for the 2017 Thaxted Festival.
ENCORE
Presenter: Peter Steadman
Assisted by: Donna Brooks, Jane Forrester & Richard Miller
We hope you have enjoyed your Harp Haven  Concert Online


Watch your email and this website for next week's Online concert

It's the big day tomorrow.

Mollie Canning reaches 100 years of age on Friday 24th July. She will be enormously pleased to know you've helped MENCAP.

We hope listeners to these concerts will help drive the total raised for MENCAP closer to £5,000.

Every gift counts, small, medium, or large. If you are able to add Gift Aid that's even better. Please click below to get started:

Please write LCAS in the message box, and bear in mind costs to MENCAP will be around 5% -10% of your total donation. 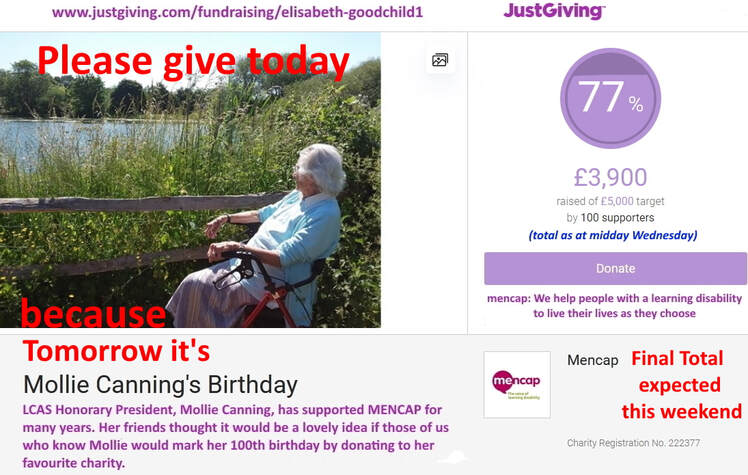